The acronym “GED” stands for General Educational Development. The GED test covers five subjects: writing, mathematics, social studies, science and reading. The writing test requires a written essay, and the math test requires students to plot graphs in addition to working problem sets. The latter three tests are multiple choice. For a passing grade, a minimum standard score is required for each test and an average standard score for all tests must be met. These scores are based upon statistical comparisons to the skills of graduating high school seniors.

The GED program in Lincoln County was initiated by Dr. Jim Miller, Jr. in 1983 while he was superintendent of the Carrizozo schools. The county’s first graduates walked across the stage during the 1984 Carrizozo High School commencement. At that time, GED fell under the New Mexico Department of Education and was administered through the K-12 school system. In 1985, GED responsibilities shifted to community colleges. Since no such institution existed in Lincoln County at the time, New Mexico State University at Alamogordo operated the program in Lincoln and Otero counties. This arrangement lasted from 1985 through 1998.

For locals wishing to further their education, the Altrusa Club sponsored adult literacy classes in Ruidoso and Ruidoso Downs. These classes prepared adults for the GED by teaching basic reading skills. They continued into the late 1990’s but, with the creation of Ruidoso Instructional Center in 1991, came the opportunity to offer education to more people across a wider range of age, socio-economic status and geographical location.

Today, Adult Education of the New Mexico Workforce Connection handles GED classes. To avoid a conflict of interest, ENMU-Ruidoso Community Education administers the actual test. This testing site has one of the highest passing rates in the state. Unlike other sites, candidates for GED tests in Ruidoso are required to attend twelve hours of classes. Since many candidates have been out of school for years and, in some cases decades, these classes identify weaknesses and help GED instructors tailor their tutoring to individual students. 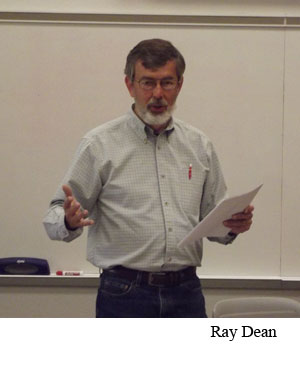 One such instructor is Ray Dean of Carrizozo. Working for Ruidoso’s ABE since 2005, Dean tutors those interested in attaining a GED in Carrizozo and outlying rural areas with the help of community volunteers. He sees two types of students: those who are court-assigned and those who come of their own accord. Many of the latter are encouraged by those who completed the program or by family members. “The first thing I do,” he explains, “Is ask: ‘Do you want to do this?’ If they say, ‘Yes,’ then I say, “Are you doing this for you?’ And they say ‘Yes,” and I say, ‘Do you know you can do this?’ If they say ‘Yes,’ then I say, ‘Okay, this is going to happen.” If you want to do this and you know you can, my job is to help you to get it done as quickly as possible.’”

One of Dean’s greatest challenges (and one he enjoys the most), is to instill the self-confidence necessary for a person to acknowledge that he or she can be successful. “When John Hemphill (Director of the New Mexico Workforce Connection) hired me, he said: ‘The only way you’ll make any progress is on a personal basis,’ and he was completely right. You’ve really got to get to know a student and build some bridges and listen to what they need.  They may not have a whole lot of self-confidence because they haven’t been successful before, so that is something that I work on a bunch.”

Diane, Dean’s wife and an educator in her own right, adds that while teaching is about confidence building, it is also about confidentiality. Once they discover that this instructor (Ray Dean) is trustworthy, things start to happen.”

Ray Dean typically tutors two to four students, two hours, twice a week. Students come and go. They do not “drop out”; they “step out,” and they are welcome to step back in, anytime. With 53% of Carrizozo living below the poverty level, education is not always a priority, earning an income is. To make matters worse, for some of those in school, the “lobster trap” syndrome exists. “If you show that you’re better than someone else,” explains Dean, “They’ll pull you back down because you are making everyone else look bad.”

In the face of these challenges, Dean has two major players on his side: his own imagination and the support of the schools. He incorporates such diverse sources as Don Miguel Ruiz’s The Four Agreements and Secret Native American Pathways by Thomas E. Mails. He uses exercises in class to make subjects, especially math, more accessible and relevant, fun and magical. Underlying these methods is to make sure that everyone who enters his class leaves knowing that he or she has a special gift. This is not New-Age speak. It comes from his real-life, past experiences. “In pharmacy, I watched people never find their gift. They took a lot of medications, they were not happy, they were not healthy, they hated their job, they hated their life. I never considered myself to be an instructor, and then I thought, ‘Wait a minute…we had pharmacies, we hired people, we taught them to do what they needed to do, right?’ And that was part of my job. So, I’m thinking: ‘It’s the same thing. Everyone has a gift and I tell them that. It’s my job to help them find it. First they have to feel worthy to have one. Once they find that gift and they give that gift back to the community…well, it doesn’t get any better than that.’”

A New Mexico resident who passes the GED receives a New Mexico high school diploma. To those who told Dean that students would drop out to take the “easier route,” he argues that there are a lot of high school graduates who would have a difficult time passing the GED. Support by the schools reinforces his contention. Rather than viewing Dean as competition or an interloper, he has been treated as a viable option for many students in the Carrizozo schools. Classes are held in the library on school computers. For all concerned, it is more important to work together to help students graduate.

Students take the GED for a variety of reasons. In a rural area, it is more important for some to work on the farm or ranch. Other reasons include teenage pregnancy, bullying, home-schooling or frequent family moves. Occasionally, older students who lied on their enlistment papers or married early come in, wanting to fulfill a personal or professional goal. As long as the motivation exists, Dean’s job is made easier, but, increasingly he sees this ambition as subverted to doubt and peer pressure. Frequently he asks: “If you could do anything in life and know that you’d be absolutely successful, what would it be?” Sadly, too many don’t know.

What is not in dispute is the value of a GED and the work of people like Dean and other GED instructors. More valuable on a grander scale is a policy that views students as individuals, who have been convinced that they can succeed. This core concept is regularly articulated in Carrizozo, but its impact is far-reaching.