The two-day event was hosted at the last minute by Ponderosa Springs Ranch – owned by Paul and Stacy Turney in Lincoln, NM – due to the Soldier Canyon fire near the IMG Hunting Lodge. “We are deeply grateful for the hospitality of Ponderosa Springs Ranch. Our event would have been cancelled if it were not for them. The last-minute venue change for the shoot was a little stressful, but everyone was wonderful and understood completely how important fire suppression teams are,” said Rhonda Vincent, Development Director of ENMU-Ruidoso Foundation. The Saturday night dinner/dance with live music by Two Shots Downs was held at Inn of the Mountain Gods.

One hundred and fifty one shooters competed in the two-day fundraising event. The High Team buckle winners on Saturday were members of the Whelchel team from Amarillo, Texas, and Second Place winners were members of John Bain’s team from Artesia, NM, who took home custom-made leather ammunition bags. We had four youth teams participate this year, one local and the others from El Paso. We awarded a Junior Shooter buckle to Colton Kuykendall who scored 86 out of 100 clays. The evening banquet was held on the lawn at the Inn of the Mountain Gods. Congratulations to John Serna from Carrizozo who was the winner of the Polaris Ranger Crew 570-4 UTV; John said he has never won anything in his life. Other great prizes were won and given away over the two-day event. Josh Carty from Midland, TX was the lucky winner of the Beretta A400 Xcel shotgun and Casey White from Artesia drew the winning ticket for the Marlin 336 (30-30). On Sunday, Omar Barnes from Nogal, NM was the lucky draw for the 17 HMR rifle and Robby Price took home cash and a Ruger American .22 for shooting a 47 out of 50 in the clay target challenge.

Vincent went on to say, “Every year our event exceeds our expectations. This event would not be successful without our sponsors and participants. We are very thankful for the growing support of AIM HIGH. The money raised provides scholarships and support for programs at ENMU-Ruidoso. We look forward to next year!” 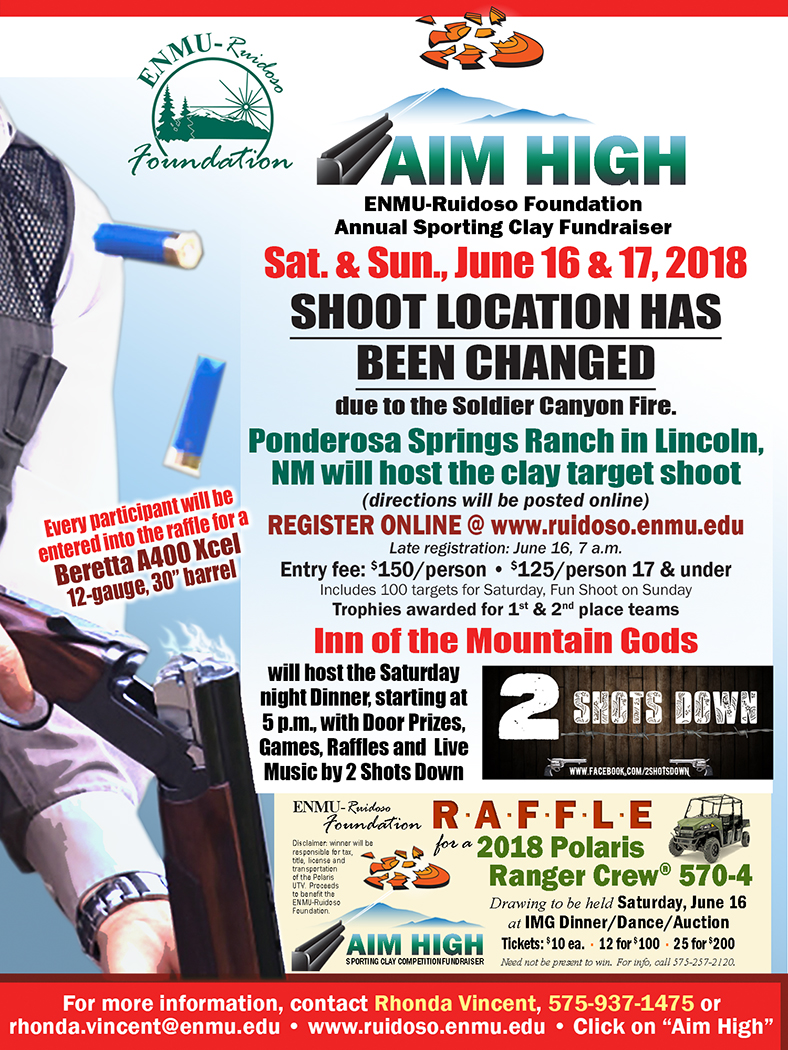