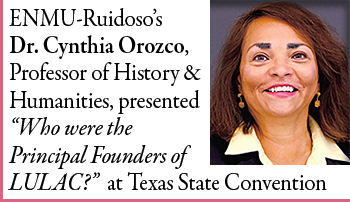 RUIDOSO, N.M. – Dr. Cynthia E. Orozco, Professor of History & Humanities at ENMU-Ruidoso presented this past summer at the Texas State LULAC convention in South Padre Island. Dr. Orozco’s presentation was titled “Who were the Principal Founders of LULAC?” She joined Texas State Representative Terry Canales, a descendant of J.T. Canales who was another LULAC founder.

Though Perales was born into poverty and became an orphan, he attended a San Antonio business school, served in World War I, worked for the Department of Commerce in Washington D.C., completed college, and became the second Latino lawyer in Texas. He served the U.S. as a diplomat in 13 countries in Latin America while he was in his 20s. He returned to Texas and founded LULAC to combat rampant racial discrimination and promote Latino empowerment.

Perales died in 1960 before Mexican American Studies was created and his personal papers were finally placed in the University of Houston archive in 2009. He collaborated with U.S. Senator Dennis Chavez of New Mexico. He was mostly unknown until Orozco’s book was published.