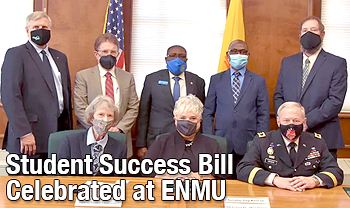 Ultimately, the goal of the Pilot Project is to help students from two-year colleges throughout southeastern New Mexico to efficiently progress toward completing their bachelor’s degree at ENMU-Portales. The bill was signed by Gov. Michelle Lujan Grisham on April 5, 2021.

“I am impressed by the collaboration and commitment across our institutions that the Pilot Project has inspired,” said ENMU President and ENMU System Chancellor Dr. Patrice Caldwell. “The faculty, registrars, deans and others at all seven campuses have worked together collaboratively and efficiently with one goal in mind – assisting students to complete their degrees.

“ENMU is deeply grateful to Senate Bill 77 sponsor Sen. Kernan, who has supported and promoted our efforts,” Caldwell concluded.