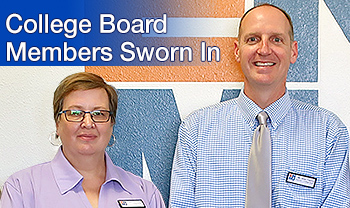 ENMU-Ruidoso College Board members Brad Treptow and Marla Romero were sworn in for new terms at the board’s March meeting recently. Both were elected unopposed in the Nov. 5 general election.

Treptow, the current board chair, received a bachelor’s degree in Journalism and a minor in Marketing from New Mexico State University. In May 2016, he received his master’s degree of Business Administration from Eastern New Mexico University. He is the public relations manager for Lincoln County Medical Center and for Presbyterian Healthcare Services regional facilities throughout New Mexico.

Romero, a long-time resident of Ruidoso, received her Associate degree from ENMU-Ruidoso and her Bachelor of Science in Management from Kaplan University in 2010. She and her husband Jimmy have two children. She is employed as Assistant Vice President/Commercial Lender for First National Bank and is active in the Rotary Club and the Lincoln County Homebuilders Association. She was appointed to her position in 2019, and reelected in November.

A third member elected in the November general election, Justin Huffmon, was absent and did not receive the oath of office.

Huffmon was appointed to the board in 2019 and elected to a full term in November.